The last place you look

Music from a window in Paris, a pianist’s ringing tones, notes cascading on the air like cartoon quarter notes slide down a music staff from the open window: I have walked from 7 Rue des Francs-Bourgeois along Pavée Payenne, stopped for a cappuccino at my favorite Café Sévigné at corner of Rue du Parc Royal—not on the street of its name—and thought once again that nothing is what it seems. I did not turn onto Rue de Thorigny toward the Musée Picasso because it is closed for renovation until 2012, believe it or not. I was gifted with the music by choosing by chance (the museum closed) R. due Parc Royal: With the sound of D. that was not D. When I’ve been to Paris before I did visit the Musée Picasso and loved its orderly chronology of his work that results in the disorderly invention that is his work as if chronology will reveal. But discovery does not come in order.

“The whorl of the shell went the wrong way. The spirals were reversed. It looked like the mirror image of a shell, and so it should not have been able to exist outside a mirror; in the world, it could not exist outside a mirror. But, all the same, I held it.” Angela Carter’s words from the short story “Reflections” from a book that sits on my shelf far from here. In Paris I’d begun to long for my book-lined condo with the exposed brick, the exposed duct work—air-conditioning and heating tubes that circle my flat. Carter’s story, my apartment reflect recent memory: When D. left me, as I have said long ago here, I got out of town, went as a visiting writer, a low-level job actually, as I am not famous, at a distinguished writing department where no one noticed my existence, as if I actually did not exist. This sense of not being known fit as if I were on the other side of a mirror.

I have been lost.

I’ve come to Paris, without transition, over water in a cold land (Paris in December). Once there I have put my passport in a drawer and think it may soon be nowhere to be found—no way to return. On the front of my passport is a picture of my father. My picture under his, under my mother’s. Remembering from where I’ve come has helped. My father’s love, my mother’s love, my childhood with them lay inside that passport to my destination. I’ve boarded a plane whose destination remains unknown. Inside the plane, stuffed chairs in fours, banquets, tables and chairs, the kitchen I lost. I look for a comfortable man, a man I know, a man who would let me lay my head on his shoulder to sleep, but that man is nowhere to be found.

A fantasy. A wish. As if I am in a strange tale of my own making.

While my daughter Sarah was pregnant with Lila, I dreamt that she was born and at barely a month she speaks, words and sentences that we can understand. She runs and I assure Sarah that a baby will not run more than a hundred feet from its mother. The baby knows not to let the parent out of sight. I think now that I dreamt this because I have known that letting go is first. We are born when let go.

I let D. go when I had no choice. And now that I do have choice, I have let him be gone. I am comforted that the music of his piano will drift from stranger’s windows.

I have sat cold in Place des Voges to consider. 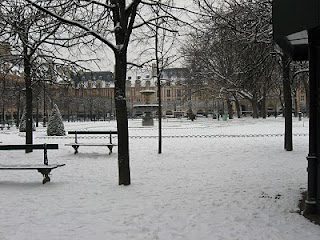 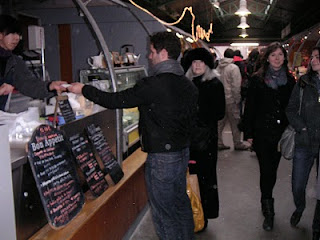 where I ate sardines and eel, drank green tea and returned to my apartment to sleep.

At 6:30 in the morning my cell phone rings and it is D. He is outside my apartment building’s door. I give him the code to get in that door. My apartment looks out on a courtyard that he must pass. I stand in my filmy white cotton robe, white hair loose and mussed before the window that looks out on the courtyard and speak to him. He stands suitcase in hand. I say, “There is no room for you.”

“I’m good at stairs.” He is standing below the window here in a doorway talking on his cell phone to mine. 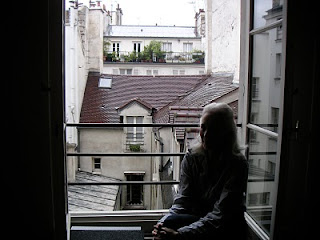 We look at one another.

You may ask, How does he know where I am? Before I left, he suggested I give him my address in case of emergency. Seemed wise.

An emergency? No. We have lived through that.

He has brought gifts: Rom-Coms: French Kiss, Charade, Something’s Gotta Give. He says he will go to a hotel post haste. He has packed lightly.

I let him stay.

My bed is a double bed and he is tired. We lie down and sleep. We do not make love. When we awake, we go to Café Sévigné for omelets, croissants and cappuccino. He tells me he has never left me. I beg to differ. He tells me that he was lost, that the time he’s been away was a time to find, to search, to understand. He tells me that he thought he would find a life that was separate from me but what he found instead was a life that was his and that did not fit anywhere without me.

We walk the day into an evening winter. Near midnight, smokers: couples, singles, the street made safe by a habit that is banned indoors. The light of the match, a young man smiling at his girlfriend as she tries again and again to get her smoke and the flame breathing as she breathes in.

What he will tell me and what I tell him is to be revealed, for time is needed to discover, but in Paris I learn this:

In what I imagine is their reflected light, I hear D.’s words and in the dark see on his chest a small box. It is a box that I have seen before but that box was locked. I used to think that some day I would find the key, for the key was lost. Now the box is open. Inside the box, his heart beats: open heart, open heart.

I have not had the key.

He has come to Paris by the route T.S. Eliot describes:

I have come to Paris this way.

Where we’ve arrived is not on any map.

I now know the answer to this question: Where do you find what you have lost?
Posted by Mary L. Tabor at 4:39 PM