With thanks to Daisy Hickman (Twitter friend and soul par excellence)
I published my first book at age 60. You might argue that I was a has-been before I began. I argue, “It ain’t over 'till it’s over.” Inside that bravado lies a question I was unable to address until my world cratered.
I stood at a distance from this question, I, who began writing with my life’s breath in 1987 when my first piece, an elegiac tribute to my mother, was published in The New York Jewish Week, at the time of year between Rosh Hashanah and Yom Kippur—the time of self-reflection for Jews. It was not the best thing I’ve written, but it was a beginning, way too late.
My mother died in 1990, my sister in 1993, my father in 1999—all from long, tortuous and serious illnesses while I remained well and strong. In 1996, I left my corporate job when I was 50 and went off to grad school to do the work of my life: To write. I now believe that work sat in wait for reasons I had yet to discover.
When I turned 60, The Woman Who Never Cooked won Mid-List Press’s First Series award and was published. The writing of that book I thought—and I thought is the key word here—brought me through the grief that lies inside the stories.
But that year, the year the book was published, my husband left me for reasons he couldn’t explain and that I couldn’t understand. The bottom of my life fell out from under me. I cratered.
My memoir tells the good, the bad and the foolish that was me after he left (I'm still working on the self-discovery this book explores, how I swooned and wept, the ingenue in a romantic comedy of my own making; you'll have to read the book to get that story.) but what I want to explore here is where the writing comes from and why it had lain in wait.
I was on Twitter one day when I saw a quote by Marianne Williamson, posted by someone else, that hit home: “Our deepest fear is not that we are inadequate. Our deepest fear is that we are powerful beyond measure” from A Return to Love, a book I have now read and found deeply candid.
Because I grew up in a household of illness—goodness, yes, but linoleum halls were my home away from home—I grew up with the fantasy that my being alive took lives. The child could not understand.
The adult wrote this, when the last of the three was dying:
I think my father knew I wanted to abandon him. Did he know that I asked myself, What has he to offer me now, to give me? That I thought, What he wants from me is too much. My mother’s and my sister’s slow, painful anguished deaths that filled my years with long linoleum hospital halls, while my father sat in the orange chairs in the waiting places for the families of the sick. While he sat distant, apart, I went to the gurneys and the bedsides. I walked down the halls to the elevators that led to the operating room where one day they cut off my sister’s leg and then one day cut off the other—the diabetes. While I held my mother’s hand and felt the blood inside her fingers slow as if the blood that bled into her brain came from that hand, reversed and went another way, took a wrong turn, and that left her hand crooked and bent like his, while I went with her to the room where they put her in a tube to look inside her brain, to confirm the stroke, the bleeding in her brain, while I did that, while she lay in the tube unconscious, he sat in an orange chair in a waiting room.
I think now, Why were those chairs, plastic-leather-cushioned or hard-curved-molded in all the rooms where he waited, all orange? Like the unexplained orange on the forehead in that poem: “the night nailed like an orange to my brow.” My father was nailed to my brow. He sat in his wheelchair with his arm around my head. Bent and angled bones that would not straighten out. I felt no blood coursing through him, no soft flesh pressing down on mine.
No way out.
The way he felt while he sat in the orange chairs?
(from “To Swim?” The Woman Who Never Cooked)
As raw as this might seem to you, it still did not get at the conscious understanding I needed to write the memoir (Re)Making Love: a sex after sixty story. I had known that aggression must be part of the writing, but I feared what must be done to create: Say the unsayable. I don’t mean that the writer must crush another. I mean the writer must crush herself. 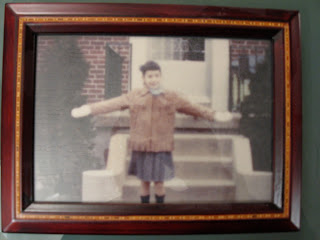 My path to that end was to rediscover the past in the therapist’s chair—not in the writing chair. It took me way too long to get into that chair, but I have to thank for that chair my husband’s announcement, Oh so Greta Garbo, “I need to live alone.” If he had not left me—and he was the straw that broke this camel’s back—if he had not sent me on my journey, I would never have written the memoir that dares to go without fear to the heart of the matter: the question, Who am I?
You have your reasons for waiting or for writing. I have mine. I know this: The little girl in this photo wrote the memoir and she wrote this piece.

And I know this: those of us who choose to create art, whether we succeed or not, must have as our mantra: Bird out of the cage, bird on a wire.

Note: I wrote this essay for the blogger and wise soul Daisy Hickman. Go here to read her intro, her wise words and Natalie Goldberg's on memoir, and then read everything Daisy posts for the heart and soul of this woman.
Posted by Mary L. Tabor at 4:29 PM