Note: This essay and interview appeared earlier in slightly different form on FactsandArts.com, where I write a column on the arts but without the photos that he and his estate so generously gave me permission to use and that are included here. Remembering LeRoy Neiman:
LeRoy Neiman’s paintings, posters and famed handlebar mustache made him one of the most recognizable artists of our time.
He tells all in All Told: My Art and Life Among Athletes, Playboys, Bunnies and Provocateurs, his autobiography that I previewed before its release on his 91st birthday, June 8, 2012. At that time, he gave me what turned out to be his last interview. Neiman died 12 days later. 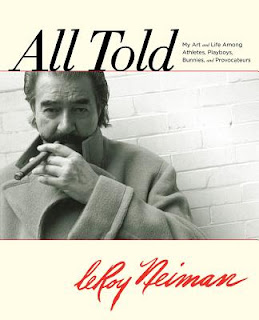 His book gives us the powerful story of the creative journey through rejection, along with his scoop on the famed and storied folk he met, cavorted with, and, yes, painted.
We journey with him from scrappy kid in Saint Paul, Minnesota, through his decision before he finished high school to join the Army during the second great war, to his celebrated career as the “Playboy artist in residence,” as he calls himself; then to see his work regularly featured on TV’s Wide World of Sports, to be named Official Artist of the Olympic Winter Games in Lake Placid and in Sarajevo and the Summer Olympics, Los Angelos, and to become the man who met and painted Muhammad Ali and virtually every sport and movie legend of his time.
To ring in a Frank Sinatra favorite—yes, he painted him too—he did it his way.

The story that Neiman reveals and that makes this autobiography worth reading, not only for the incredible images, is the struggle that underlies his extraordinary success with sales of his prints that at the time of my interview in 2012 still brought in $10 million a year.
Rejection was the name of the game that most of us would argue he won.
He did not meet with critical approval. In 1957 he gets invited to the Corcoran in DC, is on display at Chicago’s Art Institute and on to the Big Apple with the likes of Jasper Johns and Robert Rauschenberg.
But the so-called critics in New York snubbed him while his fame grew. In spite of them, he sold paintings faster than he could paint them. And he was off to the races, literally and figuratively: His paintings of jockeys and thoroughbreds are now the stuff of urban legends.
Perhaps more deeply revealing is the critical—in all senses of that word—bond with his beloved mother. He tells us, “My mother never praised or encouraged me.” Once, she even threw out his paintings. She opens and closes the book like a thread that both held him and challenged him.
But let the critics be damned. He resolutely refused to “defer” to those he dubbed “the art elites.”
LeRoy Neiman knew what he was about.
“Imagination,” he tells us, “comes of not having things,” key words for the creative soul. “Paintings were windows,” he says. He studied his peers. The power of Jackson Pollock and Willem de Kooning seemed to him “like witnessing a powerful switch from one way of seeing the world to another,” words key to the invention that marks his work.
Those lessons inform the fullness, the speed of the images that flash off his canvases.
Insert “artist” for writer in these words by Henry James and you have LeRoy Neiman: A writer is someone on whom nothing is lost.

Consider these facts culled from his curriculum vitae:
He goes AWOL briefly from the Army but comes home with an honorable discharge and five battle stars. Neiman notes, “The most significant designation on those discharge papers of November 20, 1945 was Army T/4 Artist.”
He learns his craft at the School of The Art Institute of Chicago, where he also taught, as well as at the University of Chicago and the University of Illinois.
He loved boxing and boxing loved him. To wit: Induction into the New Jersey Boxing Hall of Fame the International Boxing Hall of Fame, the Boxing Writers Association, England’s Lonsdale Boxing Club and recipient of the Marvin Kohn Good Guy Award. The list goes on: Friar’s Club Tribute, Ellis Island Medal of Honor, Honorary Doctor of Arts at School of the Art Institute of Chicago and the Arts Horizon’s Paul Newman Award for Services to the Arts and Children.
His love of fine art in music, literature and painting melds seamlessly with the seemingly paradoxical underbelly of his story: The low and high life he led in pool halls and bars andhis self-acknowledged lifelong “affection for the hucksters.”
This candid autobiography reveals the author’s private collection: A photo of Muhammad Ali, in robe and neck towel, pen-in-hand, drawing with Neiman at his side.
An evocative sepia and brown ink on paper that Neiman did of Leonard Bernstein, drawn in his presence. Neiman may not have been welcome in the Metropolitan Museum of Art, but the doors to the rehearsal halls at the Metropolitan Opera and Avery Fisher Hall were open to him.
We who admire his work and his story know that “the doppelgänger, the white bearded Monet” who lies hidden in his paintings lives in Neiman’s heart and lies at the heart of this telling.
Neiman reveals how to overcome, how to live on the margin of the fine-art world, at the center of the high life, the low life and all the in-between and never forget who you are.
Here is LeRoy Neiman in answer to my questions about his life, his love—married 55 years to Janet Byrne—and his art.
Q: You candidly describe being seen by the critics as “the urchin clambering over the gates of their exclusive world.” Who is a painter the so-called critics have not recognized?
Neiman: What a challenging question for me. One of my young artist friends, James de la Vega, has had some recognition in New York City but currently considers himself more of a philosopher/artist. At both Columbia University in New York City and at the School of the Art Institute of Chicago, I have a presence in the art departments. In both these schools there are many talented young people training and experimenting in areas that are brand new. I have always said to young artists that scholastic training and the studying of art history are crucial to fully developing as an artist. I also tell them it is essential to draw or paint every day as I have done for decades now. As I turn 91 this June 8th, I have to admit my hours at the easel have diminished.
Q: Through your mother’s piercing insight, you realized “photographs are realistic but static” and so you’ve met virtually everyone you painted. Who gave you insights into the soul that you incorporated in the painting?
Neiman: Perhaps Muhammad Ali who I drew and painted for so many years in many different settings. I really followed his entire career from the workouts to dressing room to the square ring in the big arenas. He was always a compelling subject. There is also a watercolor I did in 1969 that reveals Joe Namath at that moment as he is walking off the football field. His posture says everything about him at that moment.
Q: We have here one fashion illustration of your wife Janet. Have you painted Janet or is she hidden in paintings like your Monet figure?
Neiman:My lovely wife Janet has been in a few paintings. She is basically a reserved woman who has never sought the limelight. She has always been there throughout my career and continues to be at my side.
LeRoy Neiman died on June 20, 2012, shortly after our exchange.
On this life lived well, I close with the poet Marianne Moore, who says in her poem “What Are Years?”:
His mighty singing ... how pure a thing is joy.
This is mortality, this is eternity.
All Told: My Art and Life Among Athletes, Playboys, Bunnies, and Provocateursby LeRoy Neiman (Lyons Press, $29.95; June 8, 2012)
Posted by Mary L. Tabor at 8:02 PM 1 comment: