While the Real Simple article and its editors were deciding whether to send the mag. to bed with me and the infamous D. in it, we took a trip to New Orleans. If you can believe it Real Simple was worried that I was some big-time writer with a new memoir (Re)Making Love—but they couldn’t find the book—as my publisher has his own ways of testing the e-book market—another story for another day. So while they were thinking—as in the adorable rom-com While You Were Sleeping—after all weddings are always on the mind of the rom-com and on mine—we hopped down to the big easy.
Even if you think you know where you’re going, you don’t know where you’ll end.
On the first night we heard Ellis Marsalis play at Snug Harbor and then began to visit the neighborhood joints—where the locals hang out. I adored Mona’s Café where D. said he’d had the best roast chicken with the exception of mine—and that one is actually Thomas Keller’s; see Chapter 10 of (Re)Making Love. To read an excerpt and get the recipe, go here.
Did you know that you can ask for a drink-to-go anywhere in New Orleans? Maybe that accounts for the way stuff started to happen and link. But I had to keep my wits about me because Real Simple’s Stephanie Booth was on her tenth interview with me. Lucky I had my iPad along and lucky that I stayed sober to answer her continuing q.s for the story that appeared in the February issue.
So, I am in bed drinking a café au lait laced with chicory when Stephanie and I have this exchange (D. and I were interviewed 20 times for the article, before and after the Manhattan photo shoot. They do their homework at Real Simple.):
Here’s an excerpt, most of which did not end up in the article:
Q: Del mentioned that a few months before he announced he wanted to
live alone, he felt he had a short fuse and complained all the time.
Can you think of an example?
A: He'd been that way for a long time.  He complained about other drivers, about slow people in long lines and he would yell at me about a knife put in the dishwasher with the point up.  He wasn't mad at me, but it sure seemed like it.
Q: After Del's announcement, did he leave right away? Or did you both
stay in the house that evening?
A: I moved to the guest room.  Later we switched: So he was in the guest room.
Q: When you and Del were dating again, do you think you continued to
date other men as a way to keep your heart from being broken again? In
other words, you were keeping him at arm's length?
A: I didn't know what I was doing, but I couldn't fully trust Del. So dating helped. It was confusing. And I often told men, “I'm confused. Beware.” Not a great dating line but men saw a gauntlet dropped and went for it.
Q: You mentioned your kids were wary, at first, of you and Del
reconciling. How did you explain your decision?
A: We're still explaining. We might be explaining for the rest of our lives. To paraphrase Don McLean, They're not getting it now. Perhaps they never will.
I answer those questions and then we leave the Soniat House on Chartres Street near St. Mary’s Church, on a quiet edge of the French Quarter where the locals actually live —on the edge of the more-to-come. On Sundays, from the church horns instead of organ music overlay the street.
D. and I have come together—the memoir is written, the miracle of reunion has occurred, our apartment like our marriage is under renovation. 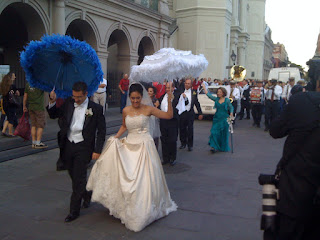 So love is on my mind. We walk to Jackson square and there’s the wedding complete with marching band at that famous church in Jackson square. 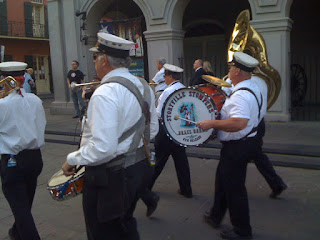 And then I get my palm read. Oh, why not? 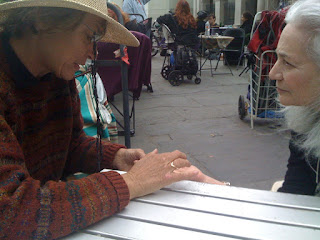 Much more to come about the interview and the photo shoot that did take place in Manhattan at the Time-Warner studio in a fab Soho loft! And more on the life change that New Orleans embodies. The city wraps you in its arms and takes over—that’s all there is to it. Give in.
Posted by Mary L. Tabor at 4:55 PM 4 comments: