The Next Big Thing: Is it a song, a radio show, a movie—or could it be: A BOOK or Magazine?

The Next Big Thing is a game of tag among literary folk. Poet Derek Walcott said in a 1997 lecture, “All art has to do with light.” And that’s what each of us, in this game of tag, is doing: Shedding light on literary works we love.

I was tagged by Anne Marie Ruff who wrote Through These Veins: Scientific intrigue, love and a look into the cure for Aids. We’ll be talking soon on the Rare Bird Radio Show where we’ll get more of the scoop on her writing life. Link back to her and see her answers to the ten questions that, with some variations as needed, are part of this game of literary tag.

Catch them if you can: 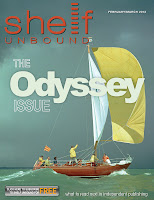 The marvelous Margaret Brown publishes Shelf Unbound and it is The Next Big Thing. Brown has a blog to go along with the mag. Margaret Brown is doing what every published writer who has worked in the solitude of a literal or metaphorical attic could hope for: She reads to find the next big thing. She’s inspired by stories that matter and by writing that cares about the way that language expresses our humanity. She has created a digital magazine that is so gorgeous you can’t resist opening its pages on your computer, your phone or you iPad and every book she discovers links to the place you can buy it. Did an angel send her?

Cuban novelist Eduardo Santiago loves to play. Read Tomorrow They will Kiss, where Cinderella meets her match in New Jersey among the Cuban immigrants who struggle to hold body and soul together. You gotta love his women and him! He helps literary folk as if it's his mission. And in 2006 he wrote an op-ed for the LA Times that includes one of the funniest, most candid bits I’ve ever read on meeting Fidel Castro by accident in the offices of CBS news! And here’s a scoop: He’s got a new novel coming soon.

Sarah Harwell, poet, author of Sit Down Traveler writes evocative poetry that will haunt you. Sarah doesn't have a blog so her tagging will appear back here with me. In Sarah's book, you’ll hear echoes of T.S. Eliot, Kafka, Pablo Neruda and, believe it or not, Tarot cards and the evocative question of predicting the future. In one of her poems, the speaker says, “I have the number of a psychic,/ but when I phone, I answer.” She explores life, love: The good, the hard and the unpredictability of it all with the Tarot Cards as her guide and ours.

Bonus: Margaret Brown, publisher of Shelf Unbound, the magazine that is in the business of shedding light, will be my guest on Rare Bird Radio on March 27. Here's the bonus scoop: her April/May cover.