I had the rare and lovely opportunity last week to post a blog entry by Martin King (scroll down to see it) and to write a piece for his blog. I've been working on a novel that explores memory: I believe in what comes through me, in what I’ve been told and what I guess. Yet I have doubts about the truth, about my belief in the power of flawed memory and of what we carry from the past, passed on by parent to child without words, with actions like my father’s pacing at the water’s edge.

And so my father, who closes that sentence, his memory, haunts me. I moved away from the novel—ever so briefly, am obsessed with it—and back smack into memoir to write this slice of my childhood and where I am now:

I’m afraid of cameras.
Laughing, my father, who died a decade ago, would say “camera-phobia” when he tried to take moving pictures of me as a child. I think he made that word up, wry jokester that he was. I’ve seen these eight millimeter terrors: a two year-old crying on the wooden floor of a covered porch while my father stands behind the camera. My sister would later say, “Silly girl, you were just afraid because you couldn’t see him. The camera in front of his face scared you. You have no phobia.” But I’m not sure—even though many photos of me now exist.
My father’s absence in a photograph began the morning-mares, the terror that occurs right before waking so that I’m sure to recall it. They strike me like a memory that hasn’t happened yet.
Here’s what happened. My father had a cousin named Cecelia who died this fall. I went to the funeral and then the shiva. My cousin, her son Howard, showed me the family photograph. It is the only family photo of my father’s parents and his six brothers and sisters and stands as proof of who they were—and he’s not in it. I don’t have a picture of my father when he was a child—not a single picture.
The only photos that mark my father’s existence begin with his marriage to my mother. He came to her with one shopping bag with everything he owned, that included one small framed photo of his mother Hannah that sits now on one of my book-lined shelves in the condo where I write. She died before I was born.
So did Mary, my mother’s mother. I carry her name. Her wedding picture to my grandfather I found like a revelation when I reframed a painting of my mother when she was young. This painting was done by her girlhood friend Gertie. The frame was broken. So I took it to be redone and behind the paper backing, like a secret, was the photo of my grandparents. There she was, young, as I had never seen her. I have one other photo of her when she was old: a small photo that everyone in the family on my mother’s side owns. I’ve seen it in all their tiny flats where they retired from larger homes and modest careers and where most of them died.
I am confounded by my father’s absence in the single photo from his childhood and by the fact that my grandmother’s wedding photo was behind the painting of my mother, the painting that she or my grandmother had framed, the photo that one of them had hidden.
The morning-mares: In all the dreams, I am missing. A blank spot is left where my photo should be as if I’ve done something to deserve to be forgotten, not recorded in rotogravure and camera-phobia re-defined.
***
My sister is in the piece but not the photo: haunting because she died young though not when that photo was taken. I posted that to remind myself of what the photo leaves out and how that's worth writing about.
I close today with thanks to Martin King whose prompt: a good one was "childhood memory". Write from that prompt and visit Martin King's blog with my thanks! His #100BlogFest is over but what a helluva good time he had, meeting writers and bloggers all over the world—and connecting us all! 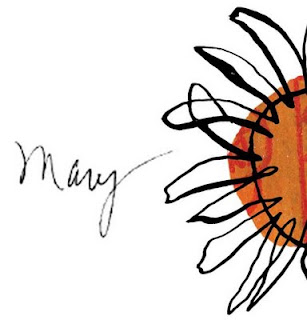