Who by Fire, a novel: What if no one reads it?

I've written a novel entitled Who by Fire, ten years in the making, and I'm pretty sure not many folks will ever hear of it or read it. Should I be discouraged? Should I give up? My answer I hope will encourage you to choose the path that leads to the work that gives you breath and life. Choose the light!

Joseph Conrad said, “In art, as in no other form of endeavor, there is meaning apart from success.”

Who by Fire is published by a small, independent publisher, Outer Banks Publishing and is distributed by the non-profit, devoted-to-the-arts distributor Small Press Distribution.


Tillie Olsen said in her wise book Silences: ‘Who will read me, who will care?’ It does not help the work to be done that work already completed is surrounded by silence and indifference—if it is published at all. Few books ever have the attention of a review—good or bad. Fewer stay longer than a few weeks on bookstore shelves, if they get there at all. … ‘Works of art’ (or at least books, stories, poems, meriting life) ‘disappear before our very eyes because of the absence of responsible attention,’ Chekhov wrote nearly ninety years ago.


This week, journalist Michael Johnson reviewed Who by Fire. (I must admit I did pray. Who knows, perhaps someone heard?)

Read, if you will, Michael Johnson's review.

To all of you who may have come here, I thank you and I offer this encouragement: Creativity operates in all endeavors. But creativity in the arts operates against all odds. Do not give up because the odds are not in your favor. Believe this: The process of the creation of something “other” gives life a fullness that I think only the attempt to create art can do. Be encouraged. Speak. Write. I'll be listening. 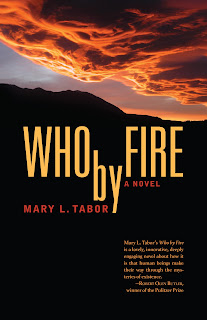 Here is the first chapter of Who by Fire:

would have told Lena about the fire I saw in Iowa, but it is regret that writes this, that longs for said things unsaid.


This fire would have amazed her. The heat was so incredibly hot it reminded me of something I learned in physics: the fact that the air around a lightning bolt is hotter than the surface of the sun. It was a barn burning—not with any political or racial overtones, but a necessary burn of an old wooden grain bin in the center of town in Whiting, Iowa, where I grew up. She was a Baltimore-grown city girl who wouldn’t be able to imagine this story of the burning though I suppose it’s a common enough event in rural parts of our country.
That I know something Lena couldn’t imagine amazes me.
I go home to Iowa—rarely—and, as it turns out, after Lena died, fortuitously: the controlled fire.
I grew up in Whiting, the son of a farmer—three hundred and thirty acres of soy beans and corn. When the burn took place, I watched it with my father. It scored me like a knife on wood. It hit me like the Schubert in G Flat, like that score, the staffs of music that I can hear by looking.
Leonard Bernstein said about music, “It doesn’t have to pass through the censor of the brain before it can reach the heart … An F-sharp doesn’t have to be considered in the mind; it is a direct hit.” The fire was like that for me. It made me see how few times in my life I’ve experienced that: a direct hit, the strike to the heart—despite my perfect pitch.
My father and I watched the burn from beginning to end.
The firemen were mostly older and younger men I knew, had grown up with—perhaps a few out-of-towners, sure—but mostly guys I could tilt a howdy finger off the steering wheel of my father’s pick-up—the old blue one I like to drive around when I’m in town, rare as that is now.
My father didn’t see fight-fire in the War, the second big war when he flight tested P-51 Mustangs, the fighter plane, but didn’t shoot its guns.
These guys, the firemen, let me get closer to the fire than most other onlookers—although I was surprised by how they trusted the oglers. They trust their neighbors to have good judgment. That too amazes me because I now live in downtown Washington—the center of politics and corruption.
My mother didn’t come to watch the fire.
My mother’s mouth turns down at the corners. She says she doesn’t smile because there are gaps between her teeth, and indeed there are, but she doesn’t smile because she has accepted what she views as her lot: That my father will rise early and make coffee, that he’ll scramble an egg in the microwave while she sleeps, that she will always make him his peanut butter sandwich for lunch, that she’ll eat her Hershey bar alone in the kitchen while he listens to the evening news, that these will be the things they’ll do and that each time they occur, the daily moments of her life with him, they remind her that she doesn’t love him.
She had nothing to learn from the fire.
I had much to learn. In the danger that the fire comprised and the safety of its control, I began to understand “heroism.” My father did not win the word hero—not in combat, by definition not a hero, no medal of honor, no wound—no purple heart.
“Heroism” is a big word often used loosely. It is a word that is central to this story. I am sure of it the way I am sure that Lena would have wanted to know about the fire. She would not have thought “obsession,” as perhaps you do. She would have understood what I meant when I called the fire “a direct hit.”
I keep a list of heroes, of people who save others, who receive awards for these acts: A man in Nova Scotia saved a man and his seven-year-old son from a fiery auto accident. A sixty-two-year-old man in San Diego pulled his eighty-four-year-old neighbor from a fire. A twenty-seven-year-old man of Centralia, Illinois, rescued a man from a burning house. A twenty-seven-year-old of Dalles, Oregon, rescued two eleven-year-old girls from an apartment fire. A twenty-five-year-old man of Syracuse, New York, a twenty-four-year-old man of Oswego, New York, and a thirty-five-year-old of Webster, New York, together saved a woman from electrocution when a 300-ton crane at a construction site overturned and pulled electrical wires onto her car.
But I am like the woman who, when her house was on fire, rescued her fire tongs.
Posted by Mary L. Tabor at 9:43 PM