With great pleasure I welcome here poet, writer, gardener Benjamin Vogt. My love is his book of prose Sleep, Creep, Leap: The first three years of a Nebraska garden. Ah, those monarch butterflies that flocked to his milkweed.

Today hear his voice as he speaks of his book Morning Glory and get a glimpse of work that has not yet gone out widely into the world. I hope you will comment, tell us your stories about land and flowers and responding to chaos. When you do, you help hold up the universe, as Annie Dillard so wisely tell us in Living by Fiction. I turn to her words to introduce you properly to the poet and gardener Benjamin Vogt:


"The most extreme, cheerful, and fantastic view of art to which I ever subscribe is one in which the art object requires no viewer or listener—no audience whatever—in order to do what it does, which is nothing less than hold up the universe.

"This is a fundamentally insane notion, which developed in my own mind from an idea of Buckminster Fuller’s. Every so often I try to encourage other writers by telling them this cheerful set of thoughts; always they gaze at me absolutely appalled. Fuller’s assertion was roughly to this effect: The purpose of people on earth is to counteract the tide of entropy described in the Second Law of Thermodynamics. Physical things are falling apart at a terrific rate; people, on the other hand, put things together. People build bridges and cities and roads. They write music and novels and constitutions. They have ideas. That is why people are here; the universe as it were needs somebody or something to keep it from falling apart. … Thoughts count. A completed novel in a trunk in the attic is an order added to the sum of the universe’s order." —Annie Dillard 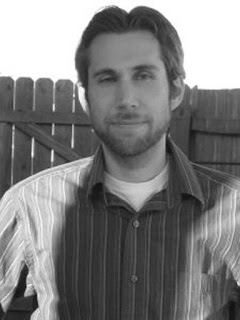 Benjamin Vogt is the author of the poetry collection Afterimage (SFA Press, May 2012). The excerpt here is taken from his unpublished memoir Morning Glory: A Story of Family & Culture in the Garden. Benjamin’s poetry and prose has appeared in American Life in Poetry, Diagram, ISLE, Orion, Subtropics, The Sun, and Verse Daily, and have been nominated for a Pushcart Prize. Benjamin has an M.F.A. from The Ohio State University and a Ph.D. from the University of Nebraska. He lives in Lincoln where he runs a native plant garden coaching business, Monarch Gardens, and is at work on a memoir about his Mennonite settler family in 1894 Oklahoma, the southern Cheyenne, and Great Plains flora and fauna.


When I wrote Morning Glory I knew I’d eventually have to unearth a complicated and buried family history, forcing myself and others to pick off some scabs and even create new wounds. This prospect made me profoundly uncomfortable. One way for me to build confidence was to start with the somewhat cautious relationship I had with my mother growing up. The relationship is one cultivated in the shadow of her childhood—wearing your emotions on your sleeve is what often caused trouble. A drunken stepfather and a conservative Baptist church saw to that. Yet if intimacy can’t be found in open, profound discussions, it can be found through the art of indirection, or metaphor—and it can be just as resonate and tender. When I finished the piece Mary publishes here, I knew it would serve as a set up to the heart of my memoir about gardening and its sheltering power for my great grandmother, my mother, and myself. The devil, or the emotion, is in the details. As a poet I was keenly aware of the imagery as a way to explore emotion, and I hope the action adds to the subtle dynamic of the family relationship I was beginning to understand.


from Morning Glory
“Mind if I join you, or are you doing your solitary writer thing?” My mother approaches the edge of the circular brick patio at the base of her back garden, and seems at once sincere and sarcastic. I had had my eyes closed for just a few minutes, so I’m not sure where she came from.
“No. Go ahead.” I’m happy she’s come by. Usually, I feel disruptive when I corner her outside—there seems to be simultaneous tension and complacence to my presence in the world surrounding my childhood home. Maybe she feels the same, I’d never thought of that before. Maybe she, a woman I’ve always taken to be strong-willed, bull-headed, and good for a kick in the pants when needed, maybe she always feels like she’s interrupting me.
I’d been outside in the early evening before dinner just for the warm shade and the inaudible soft mists that touch my legs, coming from the two foot waterfall just feet away. The smell of juniper—one that piggybacks along several specific memories in my life—sweetens and clouds the moment to the point of blissful confusion. Being in nature is like being on a merry-go-round set at 180 rpm—so much to focus on, so much to see, smell, touch, and hear. Squirrels perform Cirque du Soleil twirls and leaps on thin branches high above in the maple and oak canopy; sparrows, finches, and cardinals call themselves home in the waning hours of sunlight that begin to cool between the limbs and shadows. Mom settles into her chair without making the slightest sound, or if she does it blends into the hesitant rustle of leaves in a light breeze. 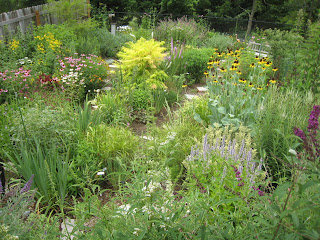 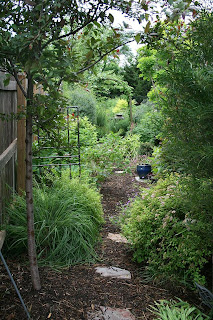 “I can’t believe how that clematis has taken off this year.” That’s what I say. That’s my metaphor. That’s what I’ve inherited from my mother and I think I detest it while I recognize the power behind it—the power that I think has led me to words in my life, to the skin-deep beauty of sound and rhythm, to how incredible words look on a page in a book, to how they feel… but never what they mean. Metaphor.
“I’ve worked so hard on that thing,” she says. “I’ve spent years fertilizing it, trying to get it to stick, to establish. Finally, it’s grasped itself and just keeps blooming. It makes me happy to see it doing so well.” She looks from the clematis bunched up, thick, wildly fragrant and alive with dark pink buds and flowers, turns toward me and then slides her eyes back to the thick trunks of the trees on the hill anchoring the entire landscape with their deep, complex fingers hidden beneath the soil—anchoring the whole garden, the house, this part of the street. “I think I’m almost done with the garden. Almost done all I can do.”
We sit there for another fifteen minutes, undisturbed by anyone else. The stream and waterfall going on and on, constant, decisive, furious and calming like a heartbeat. The light retreats from the garden to the roof of the neighbor’s house, steps up as if to see further than was possible in the low solitude of the world my mother tends day after day. The sparrows and cardinals and squirrels go on preparing for night, rushing toward themselves and their small purposes that seem so profound to them, to us at this moment. My mother shifts her weight a few times over the course of ten minutes, her head and eyes as still and patient as stone. When she decides to get up she’s slow about it, as if she were conscious of the fact she’d left something behind, didn’t know what it was, but couldn’t quite leave without figuring it out. She walks in an unaware zigzag through her garden, fingering a few blooms, turning over a few leaves, tossing twigs down the hillside before finally moving toward the top and past the side of the house. Somewhere between me and the plants, the shade and the sun, she saw what she’d been eluding.
Posted by Mary L. Tabor at 7:58 PM